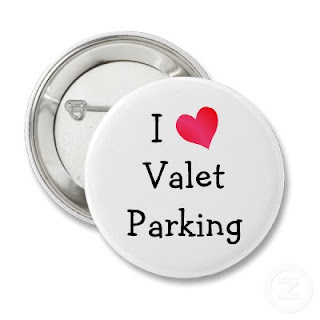 The rain poured down this weekend, so the new, intrepid valet parker took shelter under a white umbrella at the valet stand that opened this weekend at the fountain. Another stand will open this month on the 1600 block of the avenue near the parking lot.

Valet is being offered Thursdays, Fridays and Saturdays from 5 p.m. to 2 a.m. for $8 if you get it validated at one of these restaurants: Stateside, Mamma Maria, Birra, Izumi, Paradiso, Tre Scalini, Fond and Da Vinci. Without validation, it’s $15, which would still save you the 10-20 minutes it would take to find a spot on Saturdays and is a lot less than the $41 ticket you might get anyway.

It’s another success for PARC, which also just announced the beginning of facade improvement program that starts with five businesses this month. Hand it to Philly.com commenters, though, to make lemons out of lemonade and complain about the parking “mafia.”