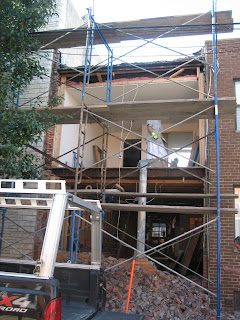 The facade has been torn off 1838 S. Camac St. for a full remodel. Rubble lined the street last week as the crew pounded away, carting off literally tons of bricks.

The house was most recently being used as the office for the Mancini catering hall next door. A copy machine graced the living room window – a bit out of place on the residential street.

Owner David Fasone bought the building at a steal for $60,000 in 2005, according to public records. A man at the construction site who said he was Fasone’s cousin said the plan was to renovate the house to sell it. Dave’s going to make a bit of money on this one.

The catering hall was also for sale for a time but it appears to have been taken off the market. Anyone heard anything about Mancini’s?

Incidentally, this house is right across the street from a recent SoPhilly Spotlight that, let’s say, questioned some of the decorating choices. The Realtor contacted us after the story posted because he was none too happy about our opinion of the listing.

“I’m not impressed with the criticism you posted about my listing,” he said. “We’ll be talking soon…”

Yikes, ominous. But that was nearly two weeks ago and still no threatening letter from a lawyer or anything. Fingers crossed.