A friendly neighborhood tipster let us know about rumors that Acme was starting to ticket cars in their lot. Well, sure enough, Acme general manager Jim Reardon told us that they have started targeting non-shoppers’ cars during business hours, 7 a.m. to 10 p.m. The tickets cost $85.

A few flourescent-colored warning fliers were still tucked under windshield wipers when we stopped by Wednesday afternoon, and at least one ticket. Of course, the parking lot was also nearly two-thirds empty. 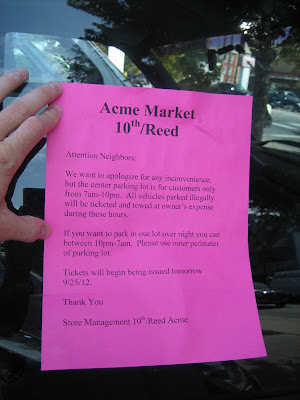 Reardon, a South Jerseyan who came to the 10th and Reed store from Mays Landing, said the parking ban had always been in place. “We just haven’t enforced it because there was always sufficient parking,” he said. “Now after summer ended there’s no spots.”Early-rising customers had been complaining they couldn’t find spots in the morning, and Reardon said that when he came into work on Saturday at 7:30 a.m., he had to park around back because there wasn’t a single spot left.

“We’re still offering the community to park in every spot on the perimeter overnight, that’s still OK,” he said. “You just can’t between 7 and 10 when the store’s open. And not in the middle of the lot, but that’s still 50 or so, maybe, 70 spaces.”

The supermarket already hires police to work security five days a week, so when there’s a car out there for over 24 hours, the cop will ticket it. Then if the car stays after the ticket, then the police decide to tow, Reardon said.

“I’m not trying to bust everybody’s stones, but I’ve been getting complaints from customers that it’s getting harder to park,” he said. “I’m not trying to hurt the community, I’m just trying to let my customers park.”
With parking already one of the neighborhood’s hot-button issues, parking in that area is about sure to be a lot tougher now. Good luck, folks.
Are there any other rumors you want us to get to the bottom of? Email us at punk@passyunkpost.com or leave your question in the comments.