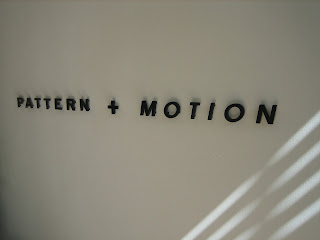 Eric Botel-Barnard and Diana Barnard are the husband and wife duo who own Pattern and Motion design studio, which opened in the old Sweet Jane space at 1820 E. Passyunk. We sat down with them recently to see what prompted the move south from Center City, what they plan to do with their storefront and why they never leave the neighborhood.

Passyunk Post: What brings you to the hood, and why did you pick a storefront?
Eric Botel-Barnard:For the last couple years our office was around 15th and Spruce and we really were expanding over the two-year period and needed more space, so we were looking for a while. We also love the idea of improving our day by working closer to where we live [near 11th and Mifflin]. … We really liked the idea of being on the ground floor and being able to interface with people to some degree even though we’re not a store that’s open to the public, but we wanted a presence. Also, the ground floor is easy for access as far as gear storage. We had really looked extensively in South Philly for an office space, and really, South Philly is not filled with second floor office space.

Diana Barnard: Or really any office space.
EBB: So that’s really the main issue, there just weren’t a lot of clean, high-tech, renovated office spaces that would be good for what we’re doing. … We’ve lived down here for about five years and the first three years, I was working out of the house, having clients come to the house, and we have a dog – the dog’s barking
DB: It very quickly became unsustainable.
EBB: So we moved out, went to our Center City office, thought the location would be a good thing for business and it turned out that a lot of the professionals that we work with actually live in this neighborhood.
DB:The greatest thing is just by being here the last few days, taking down the paper, people have just been stopping by. People we know, people we don’t know are just sort of been like, “What’s going on in there?” And we’ve gotten the chance to know the neighborhood a little better, which is also nice. … Although we had some apprehension about having storefront, like security issues, we see a huge advantage in that now, whereas before maybe we were a little tentative.

PP: What about working with Sam Sherman at PARC [which owns the building]?
EBB: Meeting Sam was fantastic. He was all for it. To his credit, he has a vision for a vibrant daytime community here. And I think that really struck a chord with us. I’ve traveled pretty extensively for work and I’ve seen main streets in different cities and there’s usually a good mix of storefront offices. You have architects, you have art galleries, and then you have your nighttime stuff. That mix seems like a really good mix, and I think that’s something that’s been missing down here.
DB: For a long time I lived on 9th and Reed and I never traveled south, or even made it over to the Avenue until we moved down here.
EBB: Now, we would rather not leave the neighborhood. We still get out, but on a day to day basis it’s really nice, and that’s part of the allure of working close to home.
DB: That was another problem with the Center City office, finding parking and basic day to day stuff just got really annoying.
EBB: Also, we’re both workaholics, so when we’re busy, it’s not unusual to be here past 10 o’clock at night, so to not have to go far is really nice.

PP: What are you going to be doing with the storefront windows?
EBB: Sam immediately thought we should put some video screens in the windows. I think we’re still trying to figure out an interesting way to make a daytime and an evening attractive-looking window. I’m not sure exactly. We’re figuring that out now. We’re definitely going to be dressing the windows.
DB: We’re just concerned that the monitor thing during the day isn’t going to read very well.
EBB: It could just looked washed out. Our style may be a little more subtle. But, we are going to do something really nice, and hopefully have something that looks fresher that we can change out. We’ve been throwing out ideas and we’re tackling that right now.
PP: What kind of ideas?
EBB: People have suggested some, including possibly a gallery space in this one window. We were thinking if that would be feasible given the kind of business that were are. Had an idea for more workspace, possibly even seasonal – well, not exactly seasonal…
PP: Like your Easter display… Flag day?
EBB (laughing): More like a high-end conceptual department store window
DB: And just swap it out
EBB: Yeah, a few times a year. We wanted to get going and see what makes sense rather than do it in a vacuum

PP: What about the work you actually do, other than display window design?
EBB: We do video production and we do design work – everything from print work to branding to web, so we’re integrating video services and web-video production with the design work so that we’re a full-service design agency now.
DB: We feel like “creative agency” best encompasses what we are. We’re not an ad agency but that’s the best explanation for describing our holistic approach.
PP: What sort of clients? You wanna name drop?
EBB: Albert Einstein Health Care, the Clay Studio, the Rock School for Dance Education, Astral Artists. Good mix right now of arts organizations and corporations. Popular Science Magazine, who else?
DB: That’s a good list. It’s a healthy sampling.