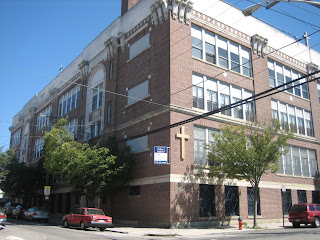 We caught up with Leo Addimando, the developer who’s planning 48 apartments in the former Annunciation school at 12th and Wharton, and we came away with a couple particularly interesting tidbits.

Addimando went before the Passyunk Square Civic last week with his initial presentation and solicited feedback for what the community wants in the 3,300 square foot commercial space. They discussed a coffeeshop and office space for the civic. The most notable idea, though, is the possibility of locating the South Philly Co-op there.

“We would love to talk to the Co-op organizers,” Addimando said.

He hasn’t connected with them yet, but this seems like it could be a great home for it. It’s right in the middle of the neighborhood. There’s a city parking lot next door and Columbus Square Park across the street, so the density of cars is probably slightly lower than some other areas of the neighborhood.

The timelines of both projects could also line up. Addimando said if all goes well, he’d like to start work on the building in the first quarter of 2013 and that construction would take about a year. And the Co-op is about halfway to reaching the number of members it needs to open, so that’s still a ways off.

Another notable part of our conversation with Addimando is that there stills seems to be a bit of a disconnect between what he plans and what the neighborhood wants. We reported that though his presentation was popular, the civic’s zoning committee felt that 48 “is too many units for the amount of provided parking spaces [37, plus indoor bike parking] and that it will have a negative impact on the neighborhood,” according to the civic’s website. “Committee suggested they come up with some other plan/design with fewer units.”

Addimando said, however, the building could have fit 70 apartments but that they decided to lower that number to minimize neighborhood concerns.

“The project could support significantly more, but we didn’t want to negotiate,” Addimando said. “Forty-eight is what it takes for us to support the purchase price we’re paying to the archdiocese.” He wouldn’t cough up the sale price and said the sale hasn’t been finalized.

He said he plans to return to the civic’s zoning meeting next month with the same plans, but he noted that he’s “very open to talking with the neighborhood.”So, it sounds like there’s still some distance between the civic and the developer, but hopefully they can find common ground to get this important project moving. From what Cassie Knox at the civic told us last week, the neighbors responded positively to his presentation, and it sounds like Addimando is committed to the project.

“This is a part of town that we think is a really nice area,” he said. “It’s a good representation of how a neighborhood can evolve in a positive away over the years.”