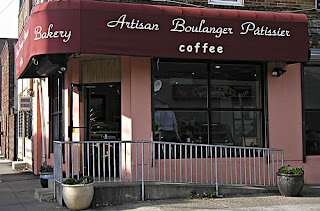 Turns out that Chris Scarduzio plans to tear down the building that houses Artisan Boulanger Patissier, which is moving to 1218 Mifflin St. as soon as they can finally get going on work there. He had planned to renovate the space.

Table 31/Mia’s/Scarduzio’s chef-owner Chris Scarduzio and partners Stephen and Tamar Olitsky have been hot to develop 1646-1648 S. 12th St. – the corner of 12th and Morris Streets – into a bistro.

But the East Passyunk project – which, incidentally, will not be an Italian concept – has hit a snag.

Steve Olitsky says their engineer has found extensive structural issues, leading the partnership to withdrawal their purchase offer to buy and rehab the building. Instead, they have executed an agreement of sale to purchase the site and demolish the building, allowing them to build what they would ideally like.

OK, folks. Let’s get moving on this stuff. This is an interesting prospect for the corner, considering the building isn’t in great a shape on the outside. Now’s the chance to put something truly interesting on that corner. We’ll keep track of this and let you know about any more specifics on the plans.