Some of the massive homes that are replacing a dilapidated warehouse (which was poorly painted with an American flag) at 12th and Latona have come onto the market. And man, are they pretty.

Three of the homes, which we told you about way back in July, are finished and ready to move in. Twelve more will be built by the time this development is finished but they’re waiting for these to sell before moving on the rest, so expect a little noise in the beginning.

For some reason, the city provided 1201 Latona for all 15 townhomes, 3 without garages but parking in the back. Unit J, pictured above, is about 2,200 square feet, and it’s only that “small” because the split level design takes away floor space in exchange for ceilings so high you could put a trampoline in the living room.

Garage, roof deck, 3 bedrooms, 2.5 baths, juliet balcony, back patio, finished basement rec room, tax abatement, a block or so from Columbus Square Park (aka Passyunk Square). All for only $425,000 from Noah Ostroff at Coldwell Banker. Even to this penny-pincher, that’s a steal. And it’s so pretty.

Here’s a 3-minute video tour if you’re so inclined, but the shiny pictures are still below.

And, then the hangover: that’s a big hole/construction zone in waiting basically next door. 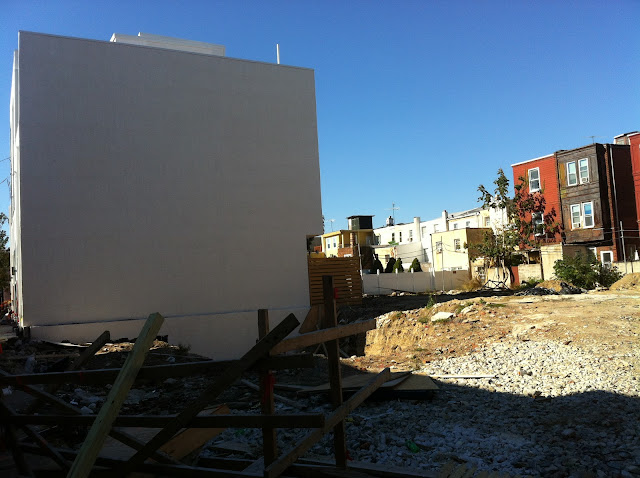