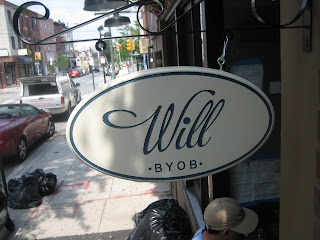 Everyone’s most beloved/feared food critic, the Inky’s Craig Laban, praised Will BYOB in his two-bell review on Sunday for its inventive takes on classic dishes. Will opened in August at 1911 E. Passyunk Ave.

As much Mr. Wizard with a culinary chemistry set as he is a flower-in-tweezers disciple of Tru, Charlie Trotter’s and Alinea, Kearse shows rare promise among his gadget-smitten generation of cooks. The 28-year-old has both the technical prowess and the artistic vision to create modern food that still makes tasty sense, and not just tricky nonsense. Usually.

He goes on to criticize a few missteps, but he doesn’t raise any issues that would turn us away. Click here for the whole review and some pretty pictures, but check out their video of chef Christopher Kearse in action if you have a few minutes.

So, folks, have you been? What did you think?