After three years and four months, tonight is the last night of service at Fond’s matchbox BYOB at 1617 E. Passyunk Ave. as they give it up for new digs at 11th and Tasker. And let’s just say, the new space is fantastic. Bright, airy, spacious (for South Philly), and the best part, an eight-seat bar.

They open Thursday night, Dec. 6, with a full bar, five reds and whites by the glass, seven each by the bottle, four bottles of sparkling and three by the glass, an ample selection of dessert wines, and two beer taps plus bottles. The menu stays the same as the old location for now, but after they’ve settled in a bit, they’ll add bar snacks that they’ll serve after the kitchen closes. Hours for the bar will go later than the kitchen, but still only 11 or midnight.

But part-owner/Chef Lee Styer says they’re not forgetting their BYOB roots. Tuesday through Thursday will still be BYOB with no corkage fee, and even on the weekends, the fee will be only $10. Another new feature is a chef’s table in a small back room. The kitchen is a bit bigger but gives Styer and his co-owners Jessie Prawlucki and Tory Keomanivong a lot more elbow room now that the dishwasher and prep areas are in the refurbished basement.

Get ready for lots of pictures, but forgive the dust and piles of stuff. They’re still putting together some finishing touches. 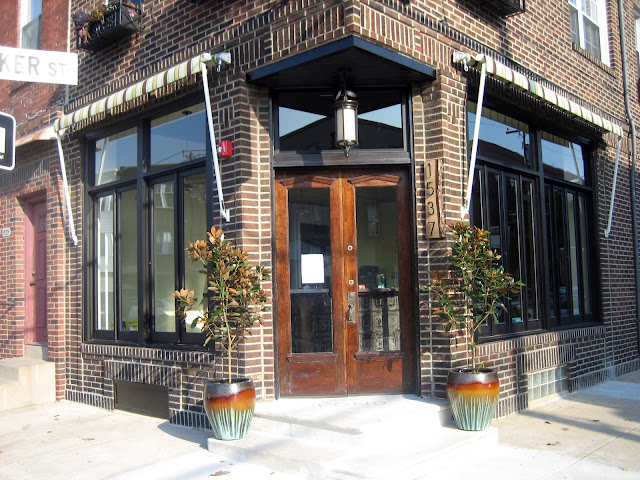 Congratulations on the expansion, folks. You’ll be sure to see us soon.