Skip to content
Developments East Passyunk Crossing
December 17, 2012February 26, 2014 Albert Stumm Contest, King of Jeans, Passyunk Ave., Poll min read
Congratulations to reader Pete, who snagged the relic from the King of Jeans in our “what the hell do we do with the sign”contest. 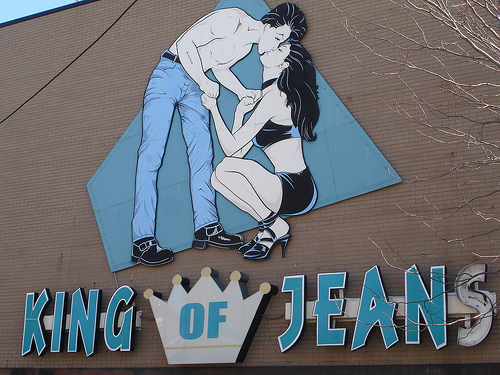 As you may know, the King of Jeans building is being turned into apartments, retail and offices. Developer Max Glass reached out to us recently to ask for help in figuring out what to do with the sign (a noble gesture, indeed). So, we turned to you, dear readers, and got more than 30 entries.

To decide the winner, we took all the suggestions and put ’em into a hat (actually, a coffee mug) and randomly selected Pete’s wise idea: “It should be mounted on the roof of the building like a billboard. That way it stays in the same location, retains the local charm, is still visible from the street.”

Not bad, especially considering there aren’t too many viable locations for the 30-foot-wide sign. But there were a lot of other good ideas, too. Which would you choose from this narrowed list?

Just for shits and giggles, here’s a roundup of the remaining suggestions, straight from our readers’ big, throbbing brains (we left out several similar versions of ideas):

“As you well know, Philadelphia is the mural capital of the country and I’m certain we could find someone willing to host the mural. Finding an artist would not be difficult either.”

“Ask Pat’s if they want it on top of their building as a counterpoint to Geno’s neon display topped with a cheesesteak across the street. King of Jeans – king of steaks…it makes sense.”

“It should be mounted on the roof of the building like a billboard. That way it stays in the same location, retains the local charm, is still visible from the street.”

“Convert it into stained glass, suspend it above Passyunk Ave between buildings, let its glory shine on all of us.””Hang it in my man cave!”

“I don’t want the lamp, but that sign belongs at the Atwater Kent Museum. Enough said.” (Editor’s note: Hey, now!)”Burn that ugly piece of crap!”

“Erect it in a park, museum, or on another building. Don’t let it wind up in a landfill.””We should have a neighborhood bonfire and burn the KOJ signs.”

“Maybe it could simply be mounted flat on the North facing side of the new building (top floor, above the 3-story building next door). People walking south down Passyunk will be able to see it way up high (kind of a hidden gem?)”

“Break it into tiny little pieces and make a Passyunk Ave Indian mosaic.””Throw it into the weed garden caddy-corner from POPE!””Inlay it in the street and paint over it with tar & cement.”

“Give it to that guy on Watkins St who made the Magic Gardens.” (eds: Isaiah Zagar)

“Auction off the whole thing and use the money for improvements to the Avenue.”

“Someone should open a bar called King of Jeans, with the sign displayed inside. Bonnie’s Capistrano is for sale, it could be re-named. Although I doubt they have the space for the sign.”

“Cover up that ugly Septa power station next door.”Thanks for all your great input, everybody. We’re going to take these ideas to Glass and we’ll report back to you.

One thought on “We’ve got a winner! Now vote for what to do with the King of Jeans sign”