An orange liquor license app in a window is almost always welcome, but in this case, it’s a goddamn blessing.

An application popped up in the window of Artisan Boulanger this week at 12th and Morris, meaning two great things for the neighborhood: Artisan Boulanger is finally getting ready to move to 1218 Mifflin st., and Chris Scarduzio’s Italian bistro is coming after all.

The license app is backed by Scarduzio and his partner at Table 31, Stephen Olitsky, according to the PLCB website. We were a little nervous about this project actually happening after it was reported that there was some structural damage to the building and that they were going to have to tear it down and rebuild. After that news emerged, an “available” sign was reinstalled on the building, and realtor Anthony Criniti told us the sale was on hold. We left Criniti a message to see what the plans are for the building, and we’ll update when he gets back to us. 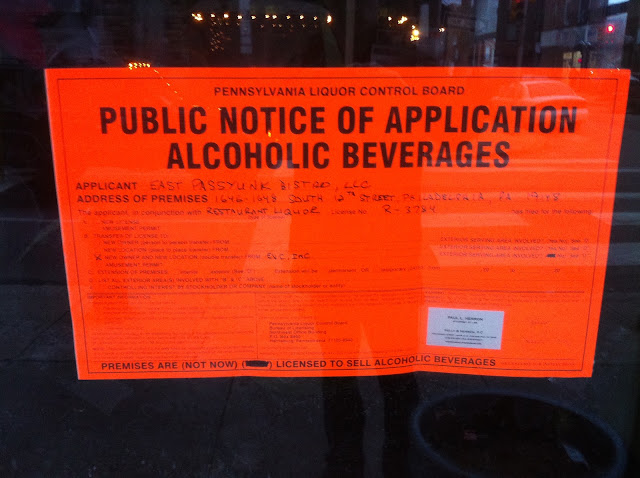 Meanwhile, we checked with Andre Chin at AB, and he said they were about 40 percent done with renovations inside the new location, mostly the electrical and plumbing work. It doesn’t show from the outside.

But here’s what it’s supposed to look like eventually

He said that now want to be in by the end of January. But we’ve been burned before, Andre…

UPDATE: Criniti just told us he has no agreement of sale as of right now, and that he doesn’t think the owner intends on tearing the building down. So, we’ll see.