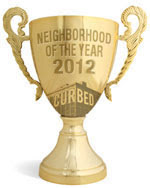 It was a strange little ride, but we were named the best neighborhood in the city by Curbed Philly, thwarting a feisty challenge from – ourselves.

That’s right, Passyunk Square was voted best city neighborhood over East Passyunk Crossing by 60 percent to 40 percent, besting along the way such established hoods as Rittenhouse Square, Society Hill and everywhere else. The nomination process is what started this odd little finale, in which Curbed entered the neighborhoods as they were nominated. Apparently, some readers took the civic organizations’ boundaries to heart. Tasker divides the two, and for a lively discussion about the various merits of each hood, check out the comments on this post.

But the bottom line is that we all won. Sure, EPX has some of the more buzz-worthy stuff, and PS has a little less litter, but we’re all in this together. Even better, five of the top eight neighborhoods in the contest were all in South Philly. So what’s that say to you? Suck it, Fishtown.