NOTE: This post has been updated from an earlier version. See below

Unless you were waiting for the bus at Broad and Tasker or a patron of the Dolphin Tavern when it knew better days, you might not have noticed Fabulous Finds, a consignment store at 1535 S. Broad St. Now, after more than 15 years in business, a sign outside says they’re going out of business.

Since everything must go, they’re offering the remaining inventory at 50% off. That includes baby ballet shoes, an adult Santa suit, and a platter painted with a colorful turkey, among other gems. When we stopped by on Thursday the store still had goods a-plenty, so hurry over, penny-pinchers, before the best finds have been taken.

The owners were unavailable for comment when we were there, and the phone line has been disconnected and emails sent to the address listed on their website bounce back. But we’re trying to get more information on what’s next for this space, so stay tuned. 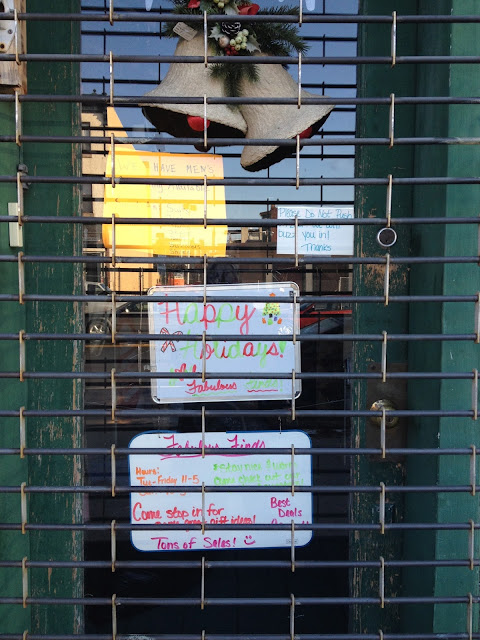 UPDATE: Outside of Fabulous Finds, a new and brightly colored sign was placed on the sidewalk on Friday: OPEN. After talking with the owner’s granddaughter, Amanda Tursi, it sounds like the shop may stay that way.

For the past year the family has been talking of moving to another location more south on Broad or closing up shop altogether. Fabulous Finds, which has been around since 1995, has lost some business in recent years with the rise of big box stores like Target and Walmart. Plus, Tursi says the location is not ideal. They’ve experienced a fair amount of theft (hence why customers have to be buzzed in) and the area doesn’t get a lot of foot traffic.
Last week, her grandfather asked her to put up the sign saying they were going out of business, but it might not happen. “It’s still up in the air,” said Tursi. “We’re going to have a family meeting to discuss what happens next.”

Suggestion box across from Giardello statue?

Call it old-school crowd sourcing. Freddie Renzulli, the owner(-ish, see below) of a building under renovation at 1830 E. Passyunk Ave., wants to open a business there. He’s just not sure what, exactly, so he put a suggestion box out