Fresh off their move to a bigger location at the fountain with a new bar, the Fond crew has added a bar menu. But don’t expect wings.

The small snack menu, which sounds as delectable as the regular menu, could masquerade as the appetizers on the regular menu and no one would give it a second thought. Take a look. 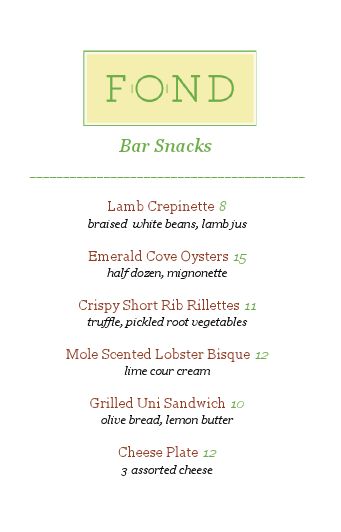 Meanwhile, the Fond folks also went before the Passyunk Square zoning committee to get a jump on their application for outdoor seating. For some reason, a sidewalk cafe requires a letter of support from the representative City Council member (Mark Squilla), who routinely turns to the neighbors of any project.

We can’t imagine any trouble with this one, so expect to be sitting across from the fountain on the first nice days of spring.

UPDATE: Just got word that the Passyunk Square Civic voted to support the outside seating with a few commonsense provisos. From their website:

7 votes of non-opposition with the following proviso: Tables to shut down during the week at 10 p.m. Tables on Tasker Street Side will shut down by 10:30 – 11:00 Friday and Saturday nights. Zoning Committee to write letter of support and submit to Councilman Mark Squilla so that he can write a letter of support as well. No hearing necessary.

3 thoughts on “Fond adds a bar menu, gets approved for outdoor seating UPDATED”